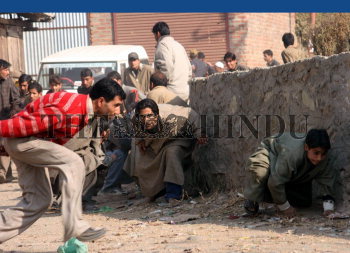 Caption : SOPORE, 12/11/2007: Villagers run for cover during a gun-battle between militants and security forces at Dooru Hajam mohalla in Sopore, 60 KM from Srinagar, on November 12, 2007. Four militants were killed along with a top commander Bilal Afgani of Jash-i-Mohammad during long gun battle. Photo: Nissar Ahmad