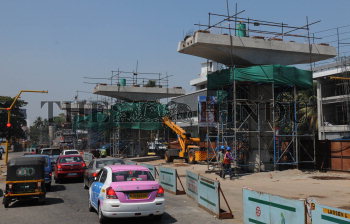 Caption : KOCHI, KERALA, 27/02/2014: Three PIER caps of Kochi Metro were launched during the past week at Pulinchodu near Aluva. They were pre-cast at HMT yard, Kalamassery. A scene on March 27, 2014. Photo: K.K. Mustafah