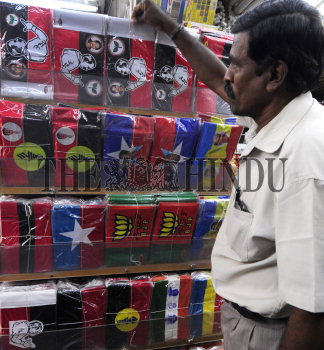 Caption : CHENNAI, 15/03/2014: Lok Sabha Election - Various national and regional political party flags and election campaign materials are seen for sale at a wholesale shop on N.S.C. Bose Road, Chennai on Saturday. India, the world's largest democracy, announced on March 5, 2014 that it would stage a five-week election for the Lok Sabha from April 7 to May 12. The entire process would be spread over 73 days, counting of votes will be held on 16th May. Photo: B. Jothi Ramalingam