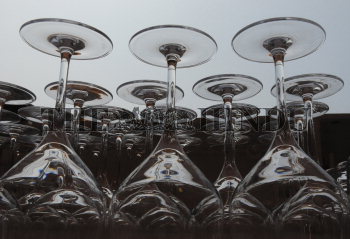 Caption : KERALA, KOCHI, 25/02/2014: A set of wine glasses kept ready for consumers at a restaurant in Kochi on February 25, 2014. In its latest estimate, Associated Chambers of Commerce and Industry of India (ASSOCHAM) has projected the market size of Indian glass industry at Rs.340 billion by 2015. It found Indian glass market was posied to increase at a compound annual growth rate (CAGR) of 15% over the next three years. The glass consumption growth is expected in construction (10-12 per cent), automotive (20 per cent), consumer goods (15-20 per cent) and pharmaceuticals (15-18 per cent) sectors. The organized sector of the glass industry employees about 30 lakh people directly and also provides indirect employment to about 5 lakh people. On the other hand, the unorganized sector employs around 5-6 lakh people and large number of unskilled workers provide jobs indirectly. About 70% of the total glass production in the unorganized sector in India is contributed by Firozabad glass industry, which is India's biggest glass industry cluster. About 75% of the total glass industries are concentrated in U.P, Maharashtra, Gujarat, Karnataka and Andhra Pradesh. The highest share in the number of factories of the glass industry is Uttar Pradesh with a share of 36.9% followed by Gujarat at 15.0%, Andhra Pradesh and Tamil Nadu at 5.6% and Karnataka with 4.0%. The highest employment in the glass industry is in Gujarat followed by Uttar Pradesh, Maharashtra and Andhra Pradesh.The major export destinations of the glass industry are USA, China, Brazil, Germany etc. Photo: K. K. Mustafah