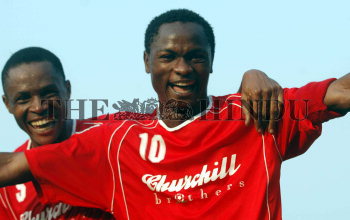 Caption : NEW DELHI, 05/11/2007: Odafe Onyeka Okolie (10) of Churchill Brothers celebrates with teammate Mboyo Iyomi after scoring a goal against Air India in the semi-final of the Durand Cup football tournament at the Ambedkar Stadium in New Delhi on November 05, 2007. Photo: Sadeep Saxena