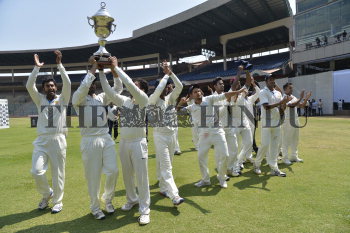 Caption : Karnataka team, winners of the IRANI Cup Cricket Tournament, celebrate at Chinnaswamy Stadium in Bangalore on February 12, 2014. Karnataka which beat Rest of India in the final, became the first Ranji Trophy champion side to win the IRANI Cup also, in the last nine seasons. Photo: K. Murali Kumar