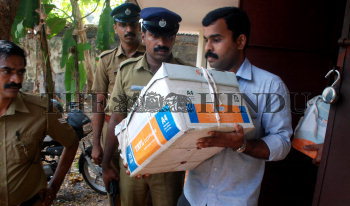 Caption : KOZHIKODE, KERALA, 04/02/2014: Court officers and the police remove material evidence and documents attached to the T.P. Chandrasekharan murder case from the Special Additional Sessions Court (Marad cases) at Eranhipalam to the District Court Complex in Kozhikode on February 04, 2014. Photo: K. Ragesh Court officers and police removing material evidence and documents of the T.P. Chandrasekaharan murder from the Marad Special Court at Eranhipalam to the Kozhikode District Court complex on Tuesday in the city - K. Ragesh