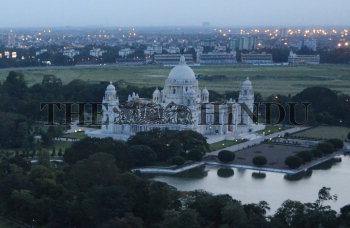 Caption : KOLKATA, WEST BENGAL, 04/02/2014: A view of the Victoria Memorial Hall in Kolkata. Sir William Emerson, President of the British Institute of Architects, designed and drew up the plan of this building, while the work of construction was entrusted to Messrs. Martin & Co. of Calcutta. Vincent J. Esch was the superintending architect. King George V, then the Prince of Wales, laid the foundation stone on January 04, 1906 and it was formally opened to the public in 1921. Since then, there was no entry fee for the visitors and walkers at Victoria Memorial. Photo: Sushanta Patronobish