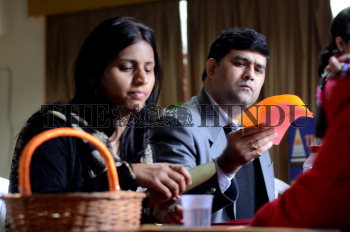 Caption : DELHI, 28/01/2014: Parents seen filling and submitting the nursery admission forms at the Indian School. Lieutenant Governor Najeeb Jung had on 18 December, 2013, issued new guidelines for nursery admissions for the session 2014-15 and took various steps such as scrapping of 20 per cent management quota. Selection of students is based on the point system which has neighbourhood proximity to school, siblings studying in same school, girl child as some of its criterias. New Delhi, Tuesday. Photo: Monica Tiwari.