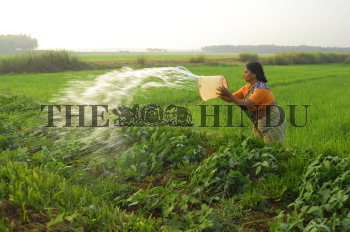 Caption : KERALA, KOCHI, 24/01/2014: A female farmer irrigating hes CROPS in a `kole' wetland near Thrissur in Kerala. Giving a thrust to agriculture, the Government in Kerala today announced a slew of measures in its 2014-15 Budget to expedite growth in the primary sector. It also unveiled measures for the welfare of farmers, including an income guarantee insurance scheme. In his Budget presented to the State Assembly, Finance Minister K.M. Mani said 90 per cent of the premium of the income guarantee scheme would be borne by the Government. Farmers holding up to two hectares would benefit from the scheme in the event of their failing to get adequate returns from the CROPS they reared. Photo: K K Mustafah