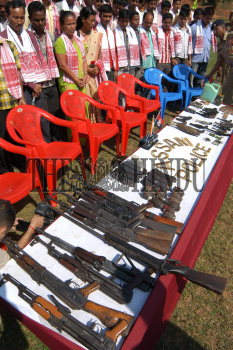 Caption : GUWAHATI, 01-11-2007:( MILITANTS SURRENDERED IN ASSAM) Surrendered militants along with their arms and ammunitions at a surrender ceremony at 4th Assam Police Battalion in Guwahati on November 1 2007. Sixty six militants belong to United Liberation Front of Asom (ULFA) and two militants of Adivashi National Liberation Force (ANLF) laid down their arms in front of senior Assam police officials. A huge quantity of arms and ammunition like 8 AK 56 rifles, 5 Pistols, 10 Revolvers, 11 number of No.36 grenades, 16 Chinese grenades, 145 round of AK and 56 round of 9mm ammunitions, one RPG cell, RD 5kg etc are surrendered by the militants. Photo: Ritu Raj Konwar