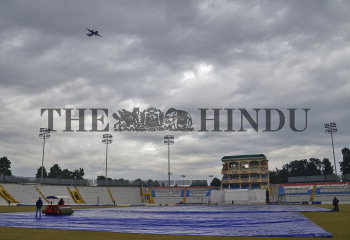 Caption : MOHALI, 22/01/2014: An aeroplane passes above the covered pitches of Mohali cricket ground as the last day's game was called off due to intermittent drizzle in the Ranji Trophy semi final match between Punjab and Karnataka, played at PCA Stadium in Mohali on Wednesday, January 22, 2014. Photo: Akhilesh Kumar