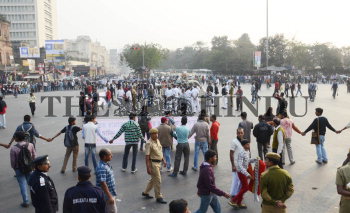 Caption : KOLKATA, WEST BENGAL, 20/01/2014: TRAFFIC BLOCKADE: Activists of the Students Federation of India block an important traffic intersection in the Esplanade area in Kolkata on January 20, 2014 to protest against the murder of a student leader Saifuddin Mollah in South 24 Parganas district. Photo: Sushanta Patronobish