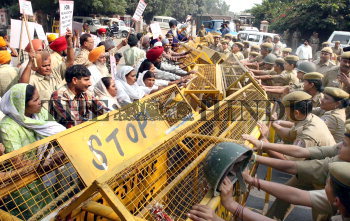 Caption : NEW DELHI, 31/10/2007: Activists of All India Sikh Conference being stopped by police during their protest march from Raj Ghat to Supreme Court, demanding suo moto action against accused of '84 Delhi riots, in Delhi on October 31,2007. Photo:Sushil Kumar Verma