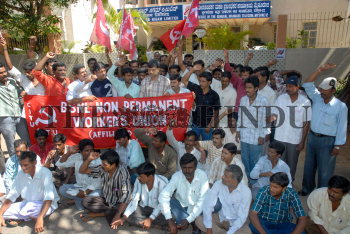 Caption : MYSORE, 31/10/2007: Members of BSNL Non-Permanant worker's Union held a demonstration in front of the office of General Manager, BSNL in Mysore on October 31, 2007 urging the authorities to fulfill their long pending demands. Phtoo: M.A. Sriram