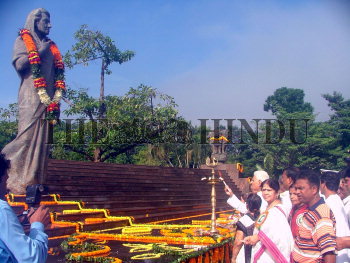 Caption : BHUBANESWAR, 31/10/2007: Governor M C Bhandare lighting the lamp at the statue of former Prime Minister INDIRA GANDHI at I G Park to mark the death anniversary of the leader in Bhubaneswar on October 31, 2007. Photo: Lingaraj Panda