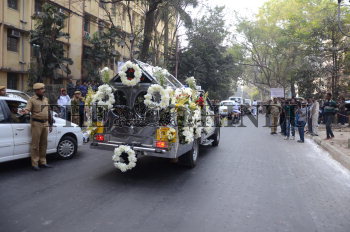 Caption : KOLKATA, WEST BENGAL, 17/01/2014: The last journey of the iconic actress Suchitra Sen at the age of 82. Fans queue up in from a private hospital in Kolkata on January 17, 2014 hoping to catch a last glimpse of the actress who had shunned public appearances for over three decades. As in life, she shunned the public glare in death too with her body being taken to the crematorium in a hearse with black-tinted glasses. Photo: Sushanta Patronobish