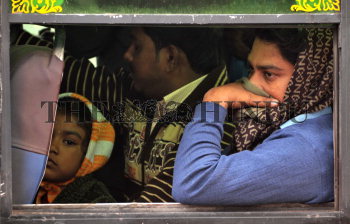 Caption : KOLKATA, WEST BENGAL, 16/01/2014: Winter warmth: Though Kolkata on January 16, 2014 recorded a minimum temperature of 18 degree Celcius up by a few degrees, people felt the cold bite a bit too much. At left, those travelling by a tram pulled down most of the shutters. At right, people in a bus warmed themselves up by wearing winter clothes. Photos: Ashoke Chakrabarty Commuters in a tram have taken the precaution of wearing warm clothes and having the windows of the vehicle shut, as temperature falls in Kolkata on Thursday. Photo: Ashoke Chakrabarty