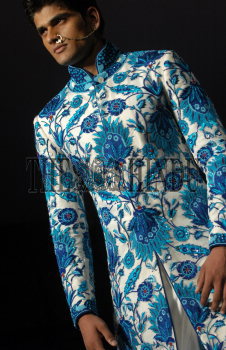 Caption : BANGALORE, 26/10/2007: An Indian models DISPLAYS a creations by Designer Rohit Bal, during the first day of The India Mens Fashion Fair 2007 (IMFF) in Bangalore on 24 October 2007. Leading designers are showcasing their collections during the four day long show in the city. Photo: K. Murali Kumar