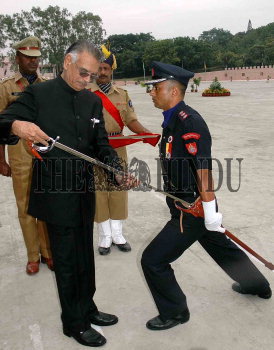 Caption : HYDERABAD, 30/10/2007: Union Home Minister Shivraj V. Patil presenting the Indian Police Service Associationās Sword of HONOUR for the Best Outdoor Probationer, Sisir Chhettri of Royal Bhutan Police at the Dishant Samaroh of the 59th Batch of IPS Probationers passing out parade held at Sardar Vallabhbhai Patel National Police Academy in Hyderabad on October 30, 2007. 96 IPS officers including 18 women joined duties in various places in the country and this is the first time that a single batch has so many woman probationers in the academyās 59-years history. Photo: Mohammed Yousuf