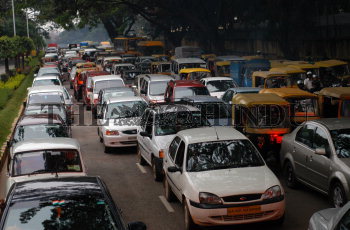 Caption : BANGALORE, 29/10/2007: A massive traffic jam paralysed the city's main business district as the political drama happened around Raj Bhavan. This was the scene at Cubbon Road from BRV Police Ground towards GPO. Whether there is a government or not, the common man has to bear the brunt of traffic chaos, in Bangalore on October 29, 2007. Photo: K. Murali Kumar