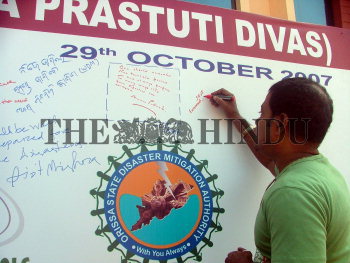 Caption : BHUBANESWAR, 29/10/2007: Passers-by putting in their comments at a poster put up for the observance of 'Orissa Disaster Preparedness Day' in memory of the super cyclone of 1999, near Jaydev Bhawan in Bhubaneswar on October 29, 2007. Photo: Lingaraj Panda