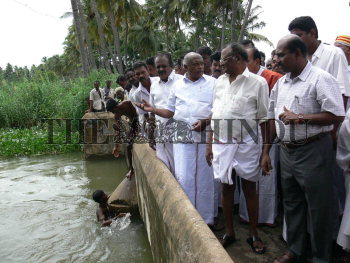 Caption : THANJAVUR, 29/10/2007: Co-operative Minister Ko.Si. Mani (center), Commercial Tax Minister S.N.M. Ubayathullah, (left) and Thanjavur District Collector C. Vijayaraj Kumar (right), looking at the Thooriyaru water channel in Veeramangudi near Thiruvaiyaru in Thanjavur District on October 29, 2007. The water channel has been blocked by the water WEEDS hence has to be removed so that the water does not flow in the paddy fields in the rainy season. Photo: M. Srinath