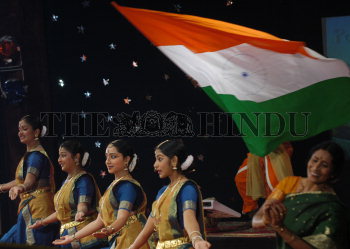 Caption : BANGALORE, 28/10/2007: Dancers performing at Smaranjali, a dance and music tribute function to pay tribute to Indian Army war heroes at Jnanajyothi Auditorium. The event was organised by the Department of Sainik Welfare and resettlement along with Doordarshan and Bangalore University, in Bangalore on October 28, 2007. Photo: K. Murali Kumar