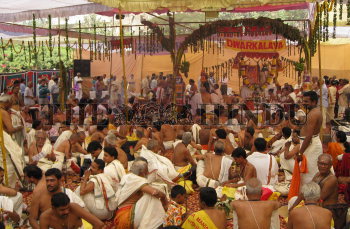 Caption : NEW DELHI, 28/10/2007: The 2nd Maha Rudra Mahayagnam in progress organised by 'DWARKAlaya' a socio cultural organisation based in DWARKA, beginning with a Ganapathi homam in the morning and ending with a Poornahuti, a large number of under privileged people were also fed during the programme on October 28, 2007, in New Delhi. Photo: V.V. Krishnan