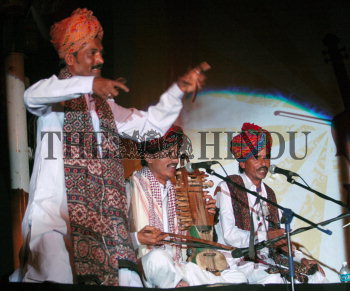 Caption : BANGALORE, 27/10/2007: The Langa Mangniar artists Sikander Khan Langa, Atta Mohamed Langa and Asin Khan Langa, from Jaisalmer District of Rajasthan, performing at the "Visions of India - a tribute to the Nation" at Palace Ground, in Bangalore on October 27, 2007. Photo: K. Murali Kumar