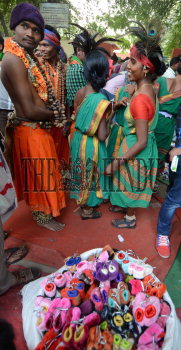 Caption : New Delhi: 19/12/2013: People under the banner of Autonomous Councils for Adivasis (Tribes) in Andhra Pradesh seen during a protest dharna 'CHALO DELHI' at Jantar Mantar demanding Formation of Tribal Development Regional Mandals in scheduled areas of Andhra Pradesh in all three regions, All ITDAs and MADA's are to be created as headquarters under district council act (self rule), Prevention of migration in the name of tribals who were included illegally from the list of Aboriginal tribals who are notified under constitutional order 22 in 1950 A.P and other various demands, in New Delhi on Thursday. Photo: Sushil Kumar Verma