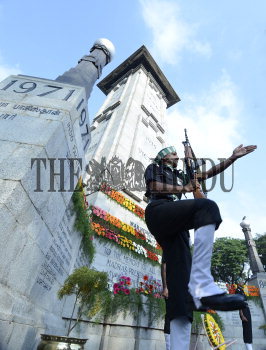 Caption : Chennai, 16/12/2013: Vijay Diwas is commemorated every 16th December in India as it marks its military victory over Pakistan in 1971 during the Indo-Pakistani War of 1971. The unilateral and unconditional surrender of the Pakistan Army and subsequent secession of East Pakistan into Bangladesh happened during this time. On this day in 1971, the chief of the Pakistani forces, General Amir Aabdullah Khan Niazi, along with 93,000 troops, surrendered to the Indian Army which was led by General Jagjit Singh Aurora. The anniversary of Vijay Diwas is observed across India by paying tributes to the martyrs who laid down their lives for the nation. On December 16 every year, Citizens, senior officials, students, war veterans and heads of army, navy and airforce lay wreaths and remember the sacrifices of the soldiers. Photo:S_R_Raghunathan