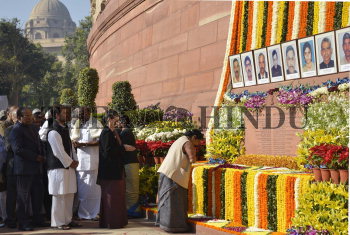 Caption : NEW DELHI, 13/12/ 2013: UPA chairperson, Sonia Gandhi, Leaders of Opposition in Loksabha Sushma Swaraj, Rahul Gandhi and P.J. Kurien at a function to pay floral tribute to the martyrs of Parliament attack on its 12th anniversary at the Parliament House during winter seesion in New Delhi on Friday. Photo: Rajeev Bhatt