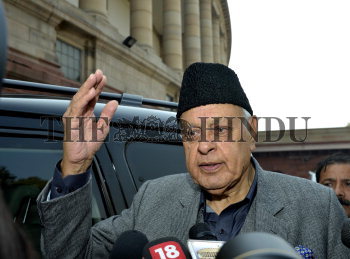 Caption : New Delhi, December 06, 2013: National Conference leader and Minister for Renewable Energy Farooq Abdullah interacting with Media after his comments on women was condemned by politicians and women's right group, at the Parliament House in New Delhi on Friday, December 06, 2013. Photo: Rajeev Bhatt