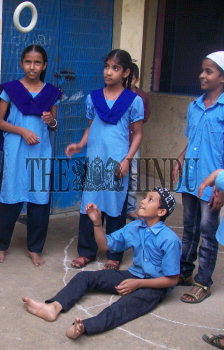 Caption : BANGALORE, KARNATAKA, 02/12/2013: Mixed bag: Aftab Pasha?s teacher at the Government Urdu Model Primary School admits that it?s a challenge to give special attention to the boy, who has polio and is reportedly a slow learner in Bangalore on December 02, 2013. Photo: Tanu Kulkarni