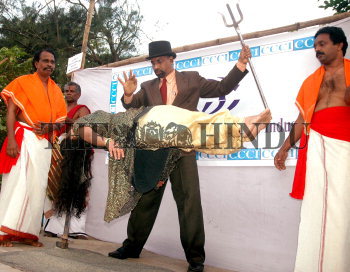 Caption : KOZHIKODE, 25/10/2007: Magician Pradeep Hudino performing a number in protest against Air India's alleged neglect of Malabar at a programme organised by the Calicut Chamber of Commerce and Industries in Kozhikode on October 25, 2007. Photo: S. Ramesh Kurup