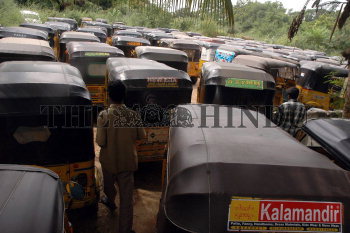 Caption : HYDERABAD, 25/10/2007: A view of the 459 autos using tampered fare meters, which were seized by the RTA and traffic officials, during a special drive against USAGE of such meters that was launched following failure of talks between the auto-rickshaw drivers' unions and the Government over replacement of mechanical meters with digital ones. Photo: Mohammed Yousuf