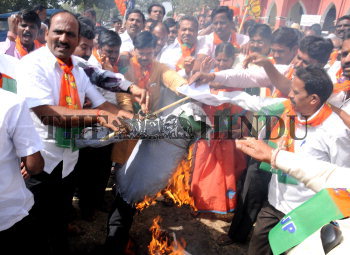 Caption : RAICHUR, KARNATAKA, 28/11/2013: VENTING THE IRE: Members of the Bharatiya Janata Party burning an effigy of Chief Minister Siddaramaiah outside the Deputy Commissioner?s office in Raichur on November 28, 2013 condemning the suicide of a farmer in Belguam. Photo: Santosh Sagar