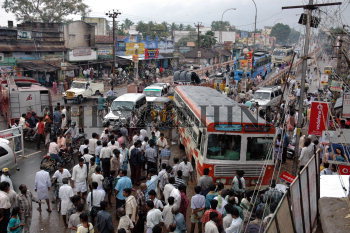 Caption : DINDIGUL, 24/10/2007: A town bus coming to Dindigul from Sanarpatti rammed into a bus shelter at Nagal Nagar injuring one woman and damaging two bicycles on October 24, 2007.The police suspect that the driver might have lost control while approaching the stop from an overbridge. Photo: G. Karthikeyan