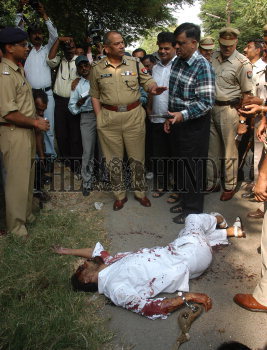 Caption : LUCKNOW, 24/10/2007: Police officials taking a first hand report from the encounter side where an alleged henchman of international mafia don Dawood Ibrahim, Noor Baksh alias 'Noora' was gunned down by a joint team of the Special Task Force of the Uttar Pradesh police and Lucknow district police while he made an attempt to escape on October 24, 2007. Noora, who had been lodged in the Lucknow District Jail, was being taken to court when four motorcycle-borne accomplices attacked the police escort vehicles on the Jail Road. Photo: Subir Roy