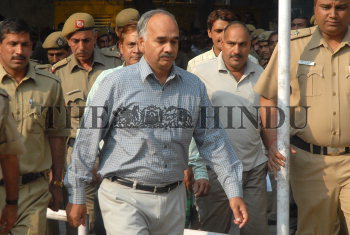 Caption : New Delhi,24/10/2007: Former ACP, Crime Branch of Delhi Police S S RATHI convicted in the 1997 Connaught Place shootout case after the verdict at the Patiala House Court in New Delhi on Wednesday. All the convicts were sentenced to life imprisonment. in New Delhi on September 24,2007. Photo:R_V_Moorthy