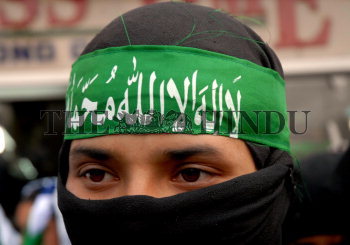 Caption : SRINAGAR, 24/10/2007: A activist of the Jammu Kashmir Muslim Khawateen Markaz (MKM) party during a protest in Srinagar on October 24, 2007. Police detained dozens of activists of MKM, a Kashmiri women's separatist party, as they tried to hold a protest march to the office of the United Nations Military Observers Group to highlight the alleged Kashmir human rights violations by Indian security forces. Photo: Nissar Ahmad