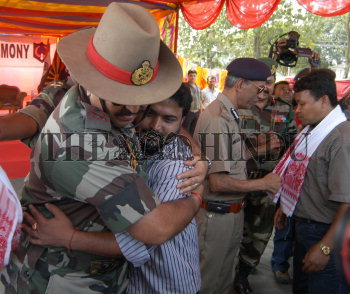 Caption : GUWAHATI, 23/10/2007: A member of ULFA militant being hugged by Lt. Gen. BS Jaswal AVSM, VSM GOC 4 Corps after laying down arms during a joint SURRENDER ceremony organized by the Indian Army and Assam State Police Department at Tamulpur about 70 km away from Guwahati on October 23, 2007. A total of 33 terrorists including two women cadres of ULFA and two of KLNLF cadres of 709, 109 and 27 battalion of ULFA SURRENDERed with 19 assorted weapons including one AK 24, two AK 56, ten pistols, five revolvers 5 grenade RDS and 6.5 kgs of explosive. All these SURRENDERed militants will stay at Rehabilitation Training Centre (RTC) for three years. Photo: Ritu Raj Konwar