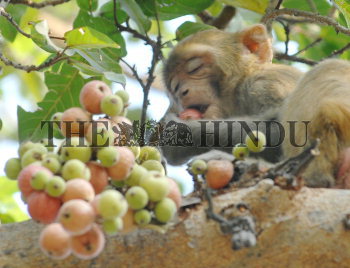 Caption : NEW DELHI, 22/10/2007: Even as the High Court has banned feeding of monkeys, here is one feasting on figs in the Lutyens area has a large number of fruit bearing trees. In a recent incident of monkey menace Delhi's Deputy Mayor fell off the terrace of his house and died, though the authorities have hired services of professional trappers from Tamil Nadu to relocate them at Asola sanctuary, in New Delhi, on October 22, 2007. Photo: V.V.Krishnan