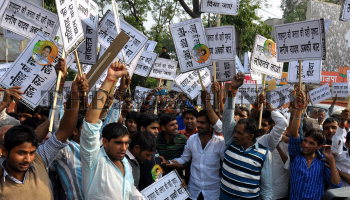 Caption : JAIPUR, 07/11/2013: Supporters of aspirants for BJP candidature, who were denied ticket in the party's first list of 176 candidates, holding a demonstration outside the BJP State headquarters in Jaipur on November 07,2013. Photo: Rohit Jain Paras