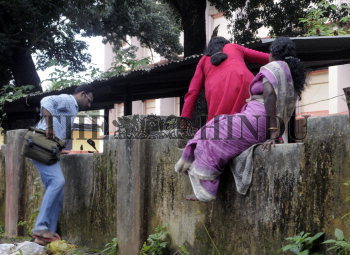 Caption : THRISSUR, KERALA, 21/10/2013: Employees, including women, climb the wall to report for duty after members of the Kerala State Karshaka Thozhilali Union laid siege to the Collectorate on October 21, 2013 in Thrissur. Photo: K. K. Najeeb