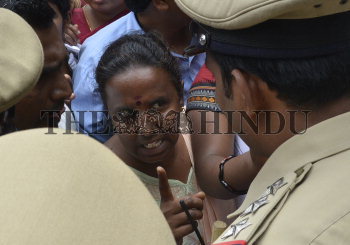 Caption : BANGALORE, KARNATAKA, 21/10/2013: Members of AIDWA and DYFI took out a protest rally demandig Government to hand-over Sowjanya's rape and murder case to CBI from Mysore Bank circle to Chief Minister's residence and they were stopped near Freedom Park in Bangalore on October 21, 2013. Photo: K. Bhagya Prakash