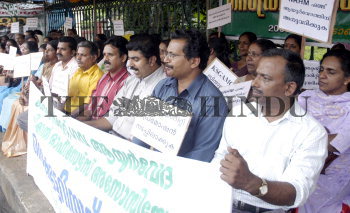 Caption : THIRUVANANTHAPURAM 18/10/2007-----The dharna organised beofre the Secretariat by the Kerala State Government Ayurveda Medical Officers Association on Thursday to press demands. They included pay parity with allopathy doctors and setting apart of 30 per cent of the funds received under the National Rural Health Mission for Ayurveda. Photo: C_Ratheesh kumar