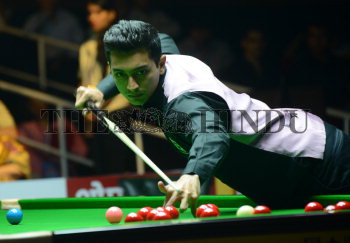 Caption : NEW DELHI 18/10/2013: India's Aditya Mehta on way to his victory against Stephen Maguire in the semifinal of the Indian Open World Ranking Snooker Championship, in New Delhi on October 18, 2013. Photo: Sandeep Saxena