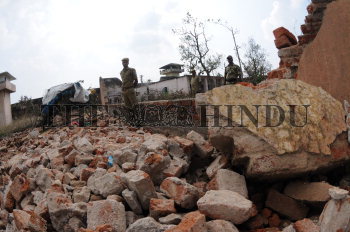 Caption : ODISHA, 18-10-2013: Security personnel standing guard at the wall of Circle Jail of Berhampur, which collapsed following PHAILIN on October 18, 2013.It was constructed in British era in 1863. Photo:CV.Subrahmanyam