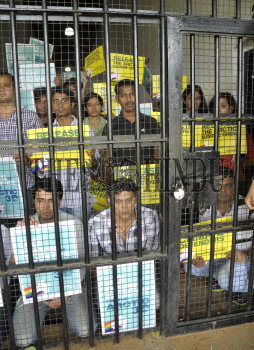 Caption : BANGALORE, KARNATAKA, 18/10/2013: Activists of Greenpeace India staging a demonstration at the Freedom Park in Bangalore on October 18, 2013 as part of the FreeTheArctic30 campaign. Twenty-eight Greenpeace activists, one freelance videographer and one freelance photographer are behind bars in Russia for having staged a protest against oil drilling from icy Arctic waters, and activists across the world are seeking their release. Photo: K. Gopinathan