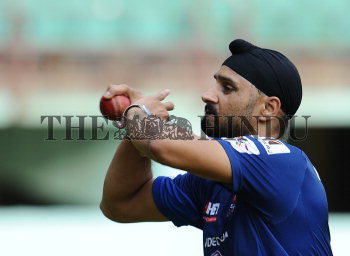 Caption : KOCHI: 16/10/2013: North Zone?s skipper Harbajan Singh during the practice session on the eve of the Duleep Trophy cricket final between South Zone and North Zone at the Jawaharlal Nehru Stadium in Kochi on October 16, 2013. Photo: V. Ganesan