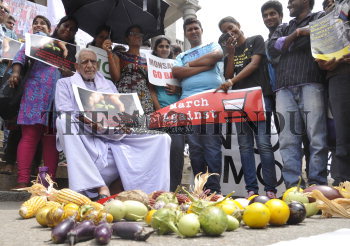 COALITION FOR A GM FREE KARNATAKA ORGANISED A SAY

Caption : BANGALORE, KARNATAKA, 15/10/2013: Coalition for a GM Free Karnataka organised a Say a loud NO to GMOs an corporatisation of food/farming system. Large number of citizens including farmers, consumers, scientists, students, activists and others gathered in front of Town Hall in Bangalore on october 15, 2013 to join hands with the global movement against Monsanto and for safe food. Freedom fighter H.S. Doreswamy also participated and spoke to the gathering. Local variety of crops displayed for comparision. Photo: K. Gopinathan