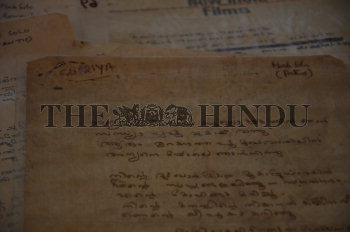 Caption : KOCHI, KERALA, 15/10/2013: Some of the many film songs written by Vayalar Rama Varma in his own hand which was collected and handed over to the family by the late G. Devarajan at the Vayalar Rama Varma Museum in Vayalar, Alappuzhai on October 15, 2013. Photo: Thulasi Kakkat